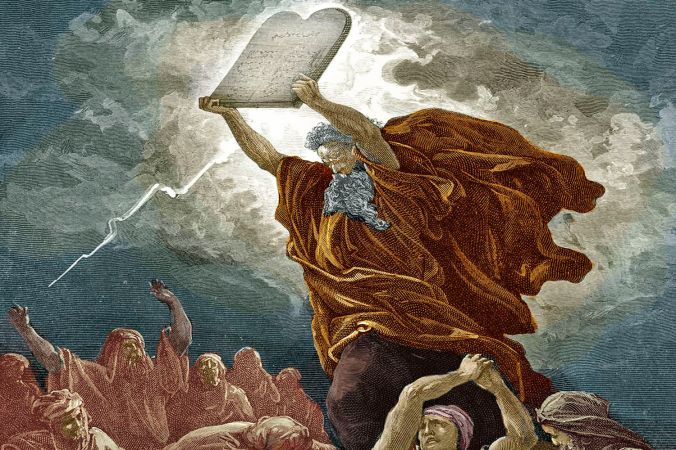 Colorized detail of Moses Breaking the Tables of the Law, by Gustave Dore. (Source)

Rabbi Samson Raphael Hirsch, the spiritual father of Modern Orthodox Judaism, launched his movement in the nineteenth century with an assault on the Frankfurt Reformers entitled “Religion Allied to Progress.” Hirsch decries the new forms of liberal, secular religion he saw animating the well-to-do populations of Jews in Germany.

“But behold! The prophet of the new message came into their midst with the cry of ‘religion allied to progress’; he filled the blank, pacified their conscience and wiped out their shame. With this magic word he turned irreligion into Godliness, apostasy into priesthood, sin into merit, frivolity into virtue, weakness into strength, thoughtlessness into profundity. By this one magic phrase he distilled the ancient world-ranging spirit of the Torah into a single aromatic drop of perfume so fragrant that in the most elegant party dress they could carry it round with them in their waistcoat pockets without being ashamed. By means of it, he carved out of the ponderous old rock-hewn Tablets of the Law ornamental figures so tiny that people gladly found room for them on smart dressing tables, in drawing-rooms and ballrooms. By means of this one magic phrase he so skilfully loosened the rigid bonds of the old law with its 613 locks and chains that the Divine Word which until then had inflexibly prohibited many a desire and demanded many a sacrifice, henceforth became the heavenly manna which merely reflected everybody’s own desires, echoed their own thoughts, sanctified their own aspirations and said to each one: ‘Be what you are, enjoy what you fancy, aspire to what you will, whatever you may be you are always religious, whatever you may do–all is religion; continue to progress, for the more you progress the further you move from the ancient way, and the more you cast off old Jewish customs the more religious and acceptable to God will you be….'”

These prophetic words came to mind as I was reading Dr. Ulrich Lehner’s excellent new offering, God Is Not Nice (2017). Published by Ave Maria Press, the book is a cannon-blast through America’s spiritual miasma. His target? The false image of God as a nice guy. I’m afraid that, as the book shows, He isn’t very “nice” at all. He’s so much better than that.

Each chapter considers one of God’s attributes as revealed in the Scriptures, the Magisterium, and Church History. How wonderful to come across a work of theology that is—brace yourself—actually about God! Gone are the boring and programmatic encumberments that so often clog up the pages of the theological press. Lehner is centrally concerned with God’s character, and only secondarily with what that must mean to us, His creations.

Lehner drinks deeply of the Scriptures. He often returns to Old Testament narratives of encounter with a God who surpasses every expectation. (Source)

It is also one of the most erudite pieces of popular religious writing I have ever read. Sprinkled in among the obligatory references to the Inklings are much heavier hitters. One finds ideas drawn from Martin Buber, Gabriel Marcel, John Crowe Ransom, Rodney Stark, Robert Spaemann, Dietrich von Hildebrand, and many more. Lehner’s prodigious knowledge of philosophy was especially apparent, as he deftly maneuvered between classical Thomism and recent German thought—not exactly the fare one expects from a major Church Historian. God Is Not Nice also has the distinction of being the only book of popular devotion I’ve encountered that speaks favorably of Erich Fromm (and cribs some of his ideas). It is to Lehner’s credit as a teacher that the reader never feels as if he’s suddenly entered rare air. He presents some difficult concepts with a simplicity that never sacrifices substance. An eighth grader could read and, more importantly, understand the text. So could an Evangelical. The book never ceases to be Catholic, but one is hard-pressed to find many insights that are so uniquely Papist as to dissuade Protestant readers. Its broad appeal comes not from a watering down of the Faith’s distinctives, but a consistent penetration of those things which lie at the very heart of the Christian life.

The book is also imbued with a deep humanity. First, Lehner’s understated humor crops up now and again, such as the time he casually compares the Prosperity Gospel preachers to Nazis (62). Or when, at the start of a chapter on intimacy with God, he writes, “Nakedness in public is a clear no-no” (80). It is difficult to imagine Lehner writing that line with a straight face, and impossible to read it with one.

The humanity of the text lies in its content as well as its style. Although Lehner hardly ever proposes specific ideas for spiritual renewal, the call to conversion is constant, simple, and universal enough that it all feels eminently practical. It works in large part because Lehner never invests his project with the unwieldy freight of, say, the hopes and failures of socially conservative American Christianity. This book is not The Benedict Option. Sure enough, Lehner is critical; for example, I was surprised to see such a forthright condemnation of the Enlightenment from an author who has made it is his life’s study. But Lehner never carries his criticism into the unpleasant realm of polemic, as Dreher so often does in his own book. What matters to Lehner is the individual human soul, not the social conditions under which the Church must forge her way through history. He is realistic about the quotidian quality of our spiritual lives. Everything must come back to the individual’s relationship with God, a relationship largely shaped by the perfectly ordinary moments of our day. The book never leaves this vision.

That isn’t to say that Lehner advocates a purely individualistic spirituality, like some eighteenth-century revivalist, red in the face, handkerchief flailing. I was struck many times by the familial note in Lehner’s work. Instead of shying away from appearing in his own work—the hallmark of a bloodless academic—Lehner grounds his spiritual call to arms in his own life. Lots of the book’s wisdom is drawn from its author’s experience of parenting. We read, in a chapter on God and suffering:

In fact, many of our children learn from the first hour of Sunday school that God wants everybody to be happy. Some parents might object that a different image of God would terrify children. I don’t think so – and I am speaking with the experience of parenting five kids. (100)

Or elsewhere, in a discussion of the Redemption:

A nice god might pardon us without care for our repentance, but so would a terrible parent who is not interested in us becoming mature and responsible persons. (118)

Or this charming anecdote, while pondering human freedom and what we really mean when we say that the Lord is “a God of Surprises”:

Of course, God is omniscient regarding all our actions and thoughts, but he leaves us our freedom and seems to choose to be surprised. I cannot help but compare this to my own parenting. When my younger children prepare a surprise present for my birthday, I usually find traces in the kitchen and the living room: crayons, pieces of paper, glue sticks, and first drafts with ‘Happy Birthday’ on them. Nevertheless, I choose to be surprised when they hand me their work of art. I think that with an omniscient God, it must be somehow like this. (126)

It thus didn’t come as too great a surprise when, at the end of his text, Lehner turned to a brief yet powerful meditation on St. Joseph. In some sense, St. Joseph is the paragon of all that Lehner advocates. He dwelt with God day to day in an intimacy unclouded by the various pretty illusions to which we all fall prey. Instead, St. Joseph drew the strength he needed from a true knowledge of God’s character. That knowledge created a great love and humble awe in him. For us, as for the Frankfurt Jews of Hirsh’s day, God is little more than a plaything or bric-a-brac, “relegated to a mantelpiece long ago and…only taken down on Sundays.” (106).

It was not so with St. Joseph. He knew the awful and living God as a human being, as one beloved. But for St. Joseph, that God wasn’t “nice.” After reading Lehner’s book, we too may be lucky enough to know that God’s not nice. He’s real.