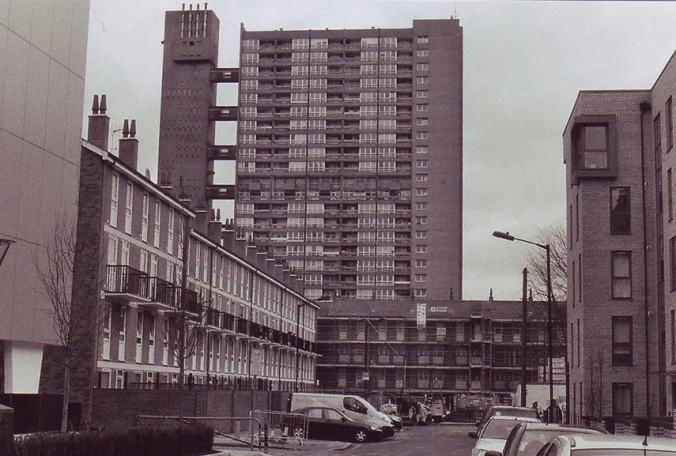 “Balfron Tower, London,” Erno Goldfinger, 1967. Sometimes, Brutalism has something of the quality of a stage set. It can work then. But most of the time, it is extremely depressing, and one rather wishes that most Brutalist structures were torn down. Imagine what a housing flat like the one picture here says about human life. What an insufferable, dehumanizing worldview is enshrined there! No wonder that our greatest dystopias are all cast in concrete. (Source)

One of the things I like about Vultus Christi is that it’s very un-polemical. So much of the Tradisphere gets bogged down in kvetching about the Pope, or internecine carping, or weird and generally unhelpful screeds about the modern world. One does get rather exhausted of reading that, and most of the time, VC avoids it. But when Dom Mark does raise his voice, his criticism is always tempered with a profound wisdom and grace. Such is the case with yesterday’s sermon at Silverstream, “Make His Praise Glorious.”

The sermon is clearly addressed to the abortion referendum looming in Ireland’s imminent future. But Dom Mark sees the bigger picture of what a “Yes” victory will mean for Irish culture. His argument is not a concatenation of the ordinary pro-life slogans about “a culture of life.” Instead, he makes a broader and, paradoxically, a more incisive point. What is at stake is the place of God in society. The referendum is not ultimately about human life, but human salvation.

There is much to like in the sermon. Of course, I’m very glad to see Dom Mark quoting from Fr. Dalgairns of the London Oratory, one of Newman and Fr. Faber’s early companions. Dalgairns is not much read today, though he was well respected in his own life for his spiritual writings and for his prolific pastoral work.

I was very taken with the aesthetic rhetoric Dom Mark employs. He illustrates the divergence between secular and sacred societies with an appeal to their built environment. Early on in the sermon, he explains the moral meaning of architecture.

New cities are always being constructed on the ruins of the old: these are skillfully planned in view of providing their citizens with every facility and technological advancement: schools, green spaces, clinics, libraries, museums, shopping districts, sports fields, industrial parks, and fitness centres. If, however, in these cities, there is no temple raised to the glory of God, no sanctuary, no altar, no tabernacle containing the irradiating Body of Christ, not only are such places not fit for man, created in the image and likeness of God, such places are dehumanising. In every place where the praise of God is silenced, where churches are closed, where the worship of God is forsaken, man becomes less than human.

It is anthropologically uncontroversial that the spaces we create have an effect on us. Our constructed surroundings in turn construct our souls. And when our ideas about the soul and its final end change, so will our buildings. If you seek an artistic exploration of this notion, I would recommend the two stunning documentary films Koyaanisqatsi (1982) and Baraka (1992). Or have a look at Pugin’s Contrasts (1836).

The builders of cathedrals, churches, and monasteries in former ages of faith had in view only this: to make glorious the praise of God. They understood that by raising edifices for nought but divine worship, and by keeping Sundays and festivals holy unto God, they were, in effect, providing their children, and their children’s children with space to be truly human.

The Christian community makes space (and, indeed, time) for the praise of God. By contrast, the post-Christian culture not only thinks differently, but looks and feels differently as well.

The secular nation descends inexorably into a harsh and dismal unloveliness. Beauty withers in every society that marginalises God and the things of God. Look at the cities constructed by the Godless totalitarian regimes of the last century: monuments of oppression haunted by hopelessness.

1. Spiritual malaise leads to doubt whether the created world can bear eternal meaning.
2. This doubt, often expressed positively as utilitarianism, leads to an unloving and even anti-aesthetic attitude towards the built environment.
3. Subsequently, aesthetic defect characterizes the built environment.
4. The original malaise is aggravated or ossifies.
5. The cycle repeats ad nauseam.

The processional nature of “unloveliness” derives from the threefold connotation of the word it negates, “loveliness.” When we speak of something as “lovely,” we are usually speaking of a moral, spiritual, or aesthetic quality. It is an assessment that lies somewhere between the Good and the Beautiful. The Unlovely is that which expresses, inspires, or provokes something somewhere between the Evil and the Ugly.

As Dom Mark makes clear, we have the duty to choose the Lovely and reject the Unlovely. “The choice of the secular city and its values will lead to barrenness, unloveliness, and emptiness. The choice of the second will lead to the sound of jubilation in the city.” If, as Goethe famously said, architecture is “frozen music,” then we should aim to build towering hymns that lift the soul to God. But the construction of that physical space depends upon the cultural space we make for the sacred—including human life as such. 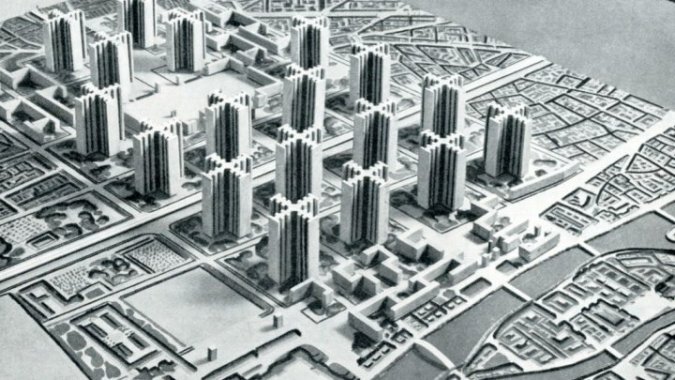 “Le Corbusier’s 1925 ‘Plan Voisin’ planned to raze parts of central Paris and replace them with high-rise towers and highways.” Looks like posterity dodged a bullet there. (Source)

One thought on “Elsewhere: The Prior of Silverstream on Secular Aesthetics”