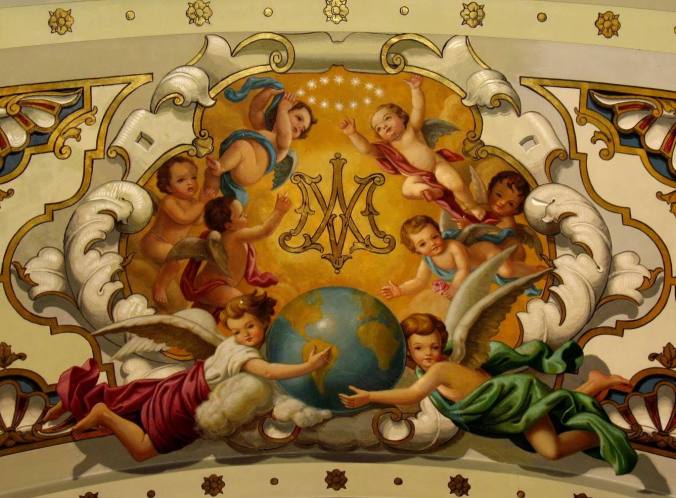 The Holy Name of Mary in a church mural. (Source)

The feast we celebrate today has moved around a bit. It only came to the kalendar in 1683, when Pope Innocent XI wished to commemorate the liberation of Vienna from the Ottoman siege. He originally placed it on the 17th, the Octave Day of Our Lady’s Nativity. The feast was later transferred to the 15th, and then done away with altogether by Archbishop Bugnini in one of his more obnoxious acts of liturgical vandalism. Pope St. John Paul II restored it in 2002, and now we celebrate it as an optional memorial on September 12th.

Accordingly, it behooves us to ponder the writings of the saints. For as it is a maxim in theology that we are led by lower things to higher, so we may pursue the heights of Our Lady’s throne only by the steps which our closer contemporaries have tread before us. Besides, while the feast may be relatively new in the life of the Church, the devotion it honors is much older. There is consequently much to choose from.

Consider the words of St. Bernard of Clairvaux.

“And the Virgin’s name was Mary.” Let us speak a little about this name, which is said to mean “star of the sea,” and which so well befits the Virgin Mother. Rightly is she likened to a star. As a star emits a ray without being dimmed, so the Virgin brought forth her Son without receiving any injury. The ray takes naught from the brightness of the star, nor the Son from His Mother’s virginal integrity. This is the noble star risen out of Jacob, whose ray illumines the whole world, whose splendor shines in the heavens, penetrates the abyss, and, traversing the whole earth, gives warmth rather to souls than to bodies, cherishing virtues, withering vices. Mary is that bright and incomparable star, whom we need to see raised above this vast sea, shining by her merits, and giving us light by her example.

All of you, who see yourselves amid the tides of the world, tossed by storms and tempests rather than walking on the land, do not turn your eyes away from this shining star, unless you want to be overwhelmed by the hurricane. If temptation storms, or you fall upon the rocks of tribulation, look to the star: Call upon Mary! If you are tossed by the waves of pride or ambition, detraction or envy, look to the star, call upon Mary. If anger or avarice or the desires of the flesh dash against the ship o f your soul, turn your eyes to Mary. If troubled by the enormity of your crimes, ashamed of your guilty conscience, terrified by dread of the judgment, you begin to sink into the gulf of sadness or the abyss of despair, think of Mary. In dangers, in anguish, in doubt, think of Mary, call upon Mary. Let her name be even on your lips, ever in your heart; and the better to obtain the help of her prayers, imitate the example of her life:  “Following her, thou strayest not; invoking her, thou despairest not; thinking of her, thou wanderest not; upheld by her, thou fallest not; shielded by her, thou fearest not; guided by her, thou growest not weary; favored by her, thou reachest the goal. And thus dost thou experience in thyself how good is that saying: ‘And the Virgin’s name was Mary.'” 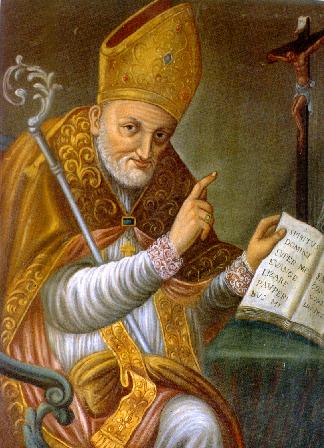 St. Alphonsus Liguori, author of The Glories of Mary. (Source)

St. Alphonsus Liguori, that Mariologist who so scrupulously records the thoughts of prior saints, affirms the antiquity and holiness of this devotion.

To begin with life, the holy anchorite, Honorius, says, that the name of Mary is [full] of all divine sweetness. And the glorious St. Anthony of Padua attributes to the name of Mary the same sweetness as St. Bernard attributed to the name of Jesus. The name of Jesus, said the latter, the name of Mary, said the former, is joy to the heart, honey to the mouth, melody to the ear of their devoted servants. It is related in the life of the venerable Father John Ancina, Bishop of Saluzzo, that when he pronounced the name of Mary, he experienced so great a sensible sweetness that he even tasted it on his lips. We also read that a certain woman in Cologne told the Bishop Marsillius, that whenever she pronounced the name of Mary she perceived in her mouth a taste sweeter than honey. Marsillius made the trial, and he also experienced the same sweetness. We read in the holy Canticles, that at the Assumption of the Virgin, the angels three times asked her name: “Who is she that goeth up by the desert as a pillar of smoke?” “Who is she that cometh forth as the morning rising?” And in another: “Who is this that cometh up from the desert, flowing with delights?” Richard of St. Laurence inquires why the angels so often asked the name of this queen, and answers: The sound of the name of Mary was so sweet to the angels, and they repeated the question that they might hear it repeated also.

But I do not hear speak of this sensible sweetness, since it is not commonly granted to all, but I speak of the salutary sweetness of consolation, love, joy, confidence, and strength, which the name of Mary universally gives to those who, with devotion, pronounce it. Speaking on this subject, Francone the Abbot says, that next to the holy name of Jesus, the name of Mary is so rich in blessings, that no other name is uttered on earth or in heaven from which devout souls receive so much grace, hope, and sweetness. For the name of Mary, he goes on to say, contains in itself something admirable, sweet, and divine, which, when it meets a friendly heart, breathes into it an odor of holy sweetness. And the wonder of this great name is, he concludes, that if heard a thousand times by the lovers of Mary, it is always heard as new, the sweetness they experience in hearing it spoken being always the same.

The blessed Henry Suso, also speaking of this sweetness, says, that in pronouncing the name of Mary, he felt his confidence so much increased, and his love so joyfully enkindled, that amidst the joy and tears with which he pronounced the beloved name, he thought his heart would have leaped from his mouth ; and he affirmed that this most sweet name, as honeycomb, melted into the depths of his soul. Whereat he exclaims: Oh most sweet name! oh Mary, what must thou thyself be, if thy name alone is so lovely and sweet?

Nor is this devotion entirely absent outside the Church of Rome. One of George Herbert’s better epigrams runs as follows:

“Anagram,” from The Temple. (Source)

Incidentally, the aforementioned Bishop of Saluzzo, Bl. John Juvenal Ancina, was a founder of the Naples Oratory and a personal disciple of St. Philip Neri. Can there be any doubt that the bishop learned his devotion at the side of his spiritual father? 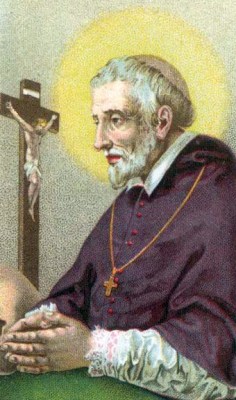 And we should learn it in turn from the saints who have gone before us, those holy men and women who now stand rejoicing in an eternal contemplation of Our Lady’s beatific name. 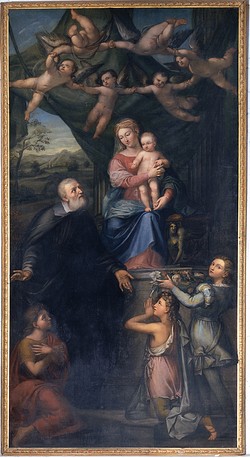 St. Philip Neri Exhorting the Youth to Pray to the Virgin, Pala Pietro. A good metaphor for how the saints instruct us in Marian devotion. (Source) 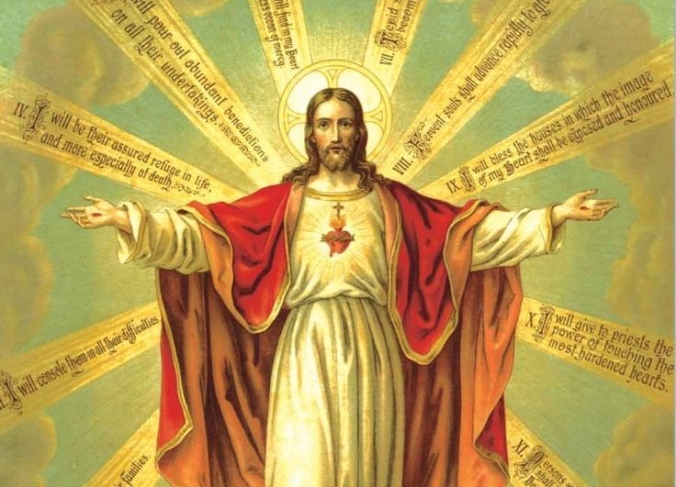 The Twelve Promises of the Sacred Heart of Jesus. (Source).

I reproduce below the fine meditation on the Sacred Heart penned by Cardinal Newman. It is number XVI of his Meditations and Devotions, taken here from the Newman Reader. 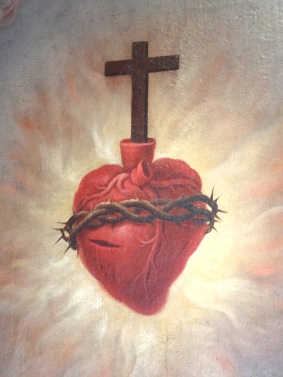 O SACRED Heart of Jesus, I adore Thee in the oneness of the Personality of the Second Person of the Holy Trinity. Whatever belongs to the Person of Jesus, belongs therefore to God, and is to be worshipped with that one and the same worship which we pay to Jesus. He did not take on Him His human nature, as something distinct and separate from Himself, but as simply, absolutely, eternally His, so as to be included by us in the very thought of Him. I worship Thee, O Heart of Jesus, as being Jesus Himself, as being that Eternal Word in human nature which He took wholly and lives in wholly, and therefore in Thee. Thou art the Heart of the Most High made man. In worshipping Thee, I worship my Incarnate God, Emmanuel. I worship Thee, as bearing a part in that Passion which is my life, for Thou didst burst and break, through agony, in the garden of Gethsemani, and Thy precious contents trickled out, through the veins and pores of the skin, upon the earth. And again, Thou hadst been drained all but dry upon the Cross; and then, after death, Thou wast pierced by the lance, and gavest out the small remains of that inestimable treasure, which is our redemption. 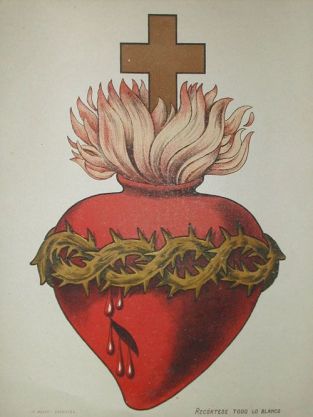 My God, my Saviour, I adore Thy Sacred Heart, for that heart is the seat and source of all Thy tenderest human affections for us sinners. It is the instrument and organ of Thy love. It did beat for us. It yearned over us. It ached for us, and for our salvation. It was on fire through zeal, that the glory of God might be manifested in and by us. It is the channel through which has come to us all Thy overflowing human affection, all Thy Divine Charity towards us. All Thy incomprehensible compassion for us, as God and Man, as our Creator and our Redeemer and Judge, has come to us, and comes, in one inseparably mingled stream, through that Sacred Heart. O most Sacred symbol and Sacrament of Love, divine and human, in its fulness, Thou didst save me by Thy divine strength, and Thy human affection, and then at length by that wonder-working blood, wherewith Thou didst overflow. 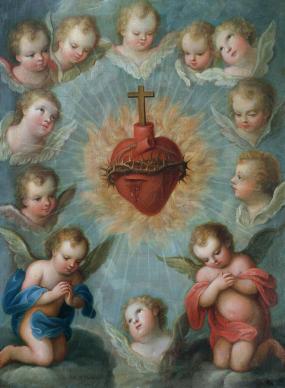 Tabernacle of the Most High. (Source).

O most Sacred, most loving Heart of Jesus, Thou art concealed in the Holy Eucharist, and Thou beatest for us still. Now as then Thou savest, Desiderio desideravi—”With desire I have desired.” I worship Thee then with all my best love and awe, with my fervent affection, with my most subdued, most resolved will. O my God, when Thou dost condescend to suffer me to receive Thee, to eat and drink Thee, and Thou for a while takest up Thy abode within me, O make my heart beat with Thy Heart. Purify it of all that is earthly, all that is proud and sensual, all that is hard and cruel, of all perversity, of all disorder, of all deadness. So fill it with Thee, that neither the events of the day nor the circumstances of the time may have power to ruffle it, but that in Thy love and Thy fear it may have peace. 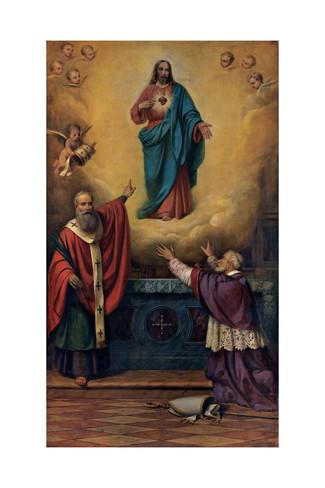