I must refer my readers to a new recording of some Gregorian chant from Silverstream Priory. The beautiful responsory, Media Vita, is very timely during this pandemic. Here is the translation, passed on by the Prior:

In the midst of life we are in death; from whom shall we seek help, save Thee, O Lord? Who for our sins art justly angered. * Holy God, Holy mighty One, Holy merciful Saviour, hand us not over to the bitterness of death.

1. In Thee our fathers hoped; they hoped, and Thou hast liberated them. * Holy God, Holy mighty One, Holy merciful Saviour, hand us not over to the bitterness of death.

2. To Thee our fathers cried; they cried and were not confounded. * Holy God, Holy mighty One, Holy merciful Saviour, hand us not over to the bitterness of death.

3. Glory be to the Father, and to the Son, and to the Holy Ghost. * Holy God, Holy mighty One, Holy merciful Saviour, hand us not over to the bitterness of death.

Translation of the Media Vita

I know I speak for the monks when I encourage you to give it a listen and take some comfort from this ancient prayer of the Church in a time when death is all around.

I would particularly note the highly idiosyncratic harmonic arrangement used here. I have not heard any other renditions of this chant like it. I grew up listening to the Benedictines of Santo Domingo do Silos, and although I like their hauntingly pure Media Vita, the Silverstream version has a complexity and depth that feels very different, if just as moving.

The accompanying film is also of very high quality. I have known the monks of Silverstream for six years. This is by far the best video I’ve seen from them. It does a good job capturing the peculiar beauty of that monastery in Springtime, as well as the powerful sense of holiness that radiates throughout the house and grounds from the Blessed Sacrament. And for those who care about such things, there’s a lovely conical requiem chasuble from 3:23 on.

Give it a listen, and please consider supporting the monks through a donation or by shopping at their excellent online store. The monks are streaming their masses and some of their offices throughout this crisis, and I recommend following them for what will no doubt be a stirring and holy Paschal Triduum (albeit at a distance). 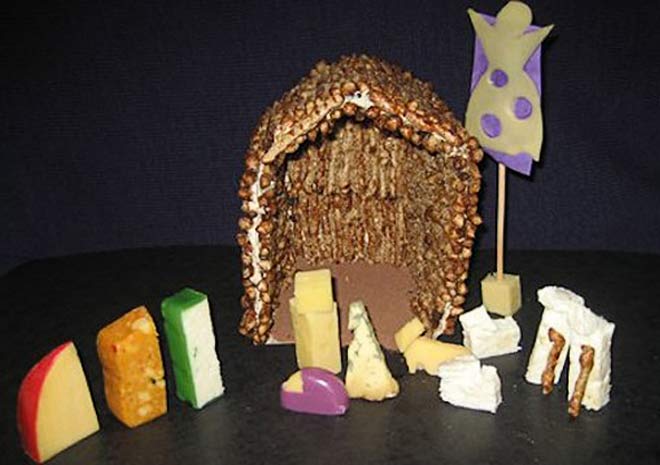 This nativity is kinda cheesy. (Source)

Fr. Dwight Longenecker has said all that really needs to be said about this year’s crêche at the Vatican. The issue is not just that it’s kind of crappy art, but that it dramatizes a heretical theology – a liberal Pelagianism of good works. Do give it a view.

I refer you this morning to two excellent pieces I had the good fortune of reading last night. The first is a winsome yet profound meditation on goggles by Pater Edmund Waldstein O.Cist. of Stift Heiligenkreuz. Right out of the gate, Peregrine Magazine is putting forward excellent content. Here’s an excerpt:

Putting them on, I suddenly remembered why I spent so much time swimming as a child. What a world opens up! Looking down: the still forest of water plants, the rays of the sun lighting up the particles of algae. Looking up: the strange silver shield of the surface with the blazing sun above it. And the freedom of movement of swimming! The rigid postures of life on land yield to the wonderful abandon of the water. (What sense of freedom is that, I wonder).

Among other things, I was stunned and somehow delighted to learn that the good monks of Heiligenkreuz are permitted to swim in a lake.

The second offering I have for you is a piece posted by Archbishop Cranmer. In it, he quotes at length from a recent address given by Bishop Philip North of the C of E. Bishop North is no stranger to controversy, having been shunted out of his appointment as Metropolitan of Sheffield due to his (orthodox, Biblical, and traditional) view that women cannot be priests.

…When my old Parish in Hartlepool, a thriving estates Church, was vacant a few years ago, it was over two years before the Bishop could appoint. Clergy didn’t want to live in that kind of area, they didn’t want their children educated alongside the poor – you’ll know the litany of excuses. At the same time a Parish in Paddington was advertised and at once attracted 122 expressions of interest. That is the true measure of the spiritual health of the Church of England.

This phenomenon is, incidentally, a good argument for a celibate clergy. If you don’t have children, you don’t have to worry about their safety and upbringing when it comes to ministry. But I digress. More from Bishop North:

…we need to reflect on the content of our proclamation. There is a perception that there is a single, verbal Gospel message that can be picked up and dropped from place to place. ‘Christ died for our sins.’ ‘Life in all its fullness.’ Those well-known statements which so easily trip off the Christian tongue. But the Gospel is not a message. It is a person, Jesus Christ, and the way he speaks into different contexts and situations differs from place to place. If you turn up on an estate with nice, tidy complacent answers to questions no one is asking, they will tear you to shreds. Successful evangelism begins with intense listening, with a profound desire to hear the issues on people’s minds and a genuine open heart to discern how Jesus speaks into them. If you’re in debt, what is the good news? If you’re dependent on a foodbank to feed your children, what is the good news? If you’re cripplingly lonely and can’t afford the bus into town, what is the good news? Simple formulae, or trite clichés about God’s love won’t do as answers to these questions.

This is sound Christian wisdom for all, not just Anglicans. It reminds me of the old Anglo-Catholic radicalism that animated such priests as St. John Groser, V.A. Demant, not to mention Mervyn Stockwood (before he publicly debated Monty Python), Ken Leech, and the late, great layman R.H. Tawney. Anglo-Catholicism has long been a hotbed of Christian Socialism, but a very peculiar kind. Like almost everything Anglo-Catholic, there is a note of eccentricity about their politics. These are, after all, the same people who venerate Charles I as a Martyr. Yet the prevalence of Christian Socialist ideas among Anglo-Catholics of the classical period was so great that in 1918 a priest could place an ad in The Church Times for one “healthy revolutionary, good singing voice” (quoted in Spurr 78). In his authoritative study of T.S. Eliot’s religion, ‘Anglo-Catholic in Religion’ : T.S. Eliot and Christianity, Barry Spurr tells us of the man popularly known as the “Red Vicar”:

Perhaps the most famous [Anglo-Catholic country parish], apart from Hope Patten’s Walsingham…was Conrad Noel’s parish church at Thaxted, in the diocese of Chelmsford, where elements of Roman Catholicism were combined with neo-mediaevalism and extreme socialism. (Spurr 78).

Bishop North is cut from this cloth, having attended St. Stephen’s House for his theological studies. While I can’t confirm this, the House’s Wikipedia page says that “Many former students, in the tradition of the college, go on to minister in urban priority areas and parishes which suffer poverty and deprivation.” I am proud that I, too, will be an alumnus of that same college, steeped as it is in some of the better traditions of English Christianity. I may not be studying for ordained ministry, but I hope to profit by the example of those who are and have.

May God prosper Bishop North. Let those who can make a difference heed his cry—and, with grace and bit of luck, perhaps some day he’ll bring his prophetic voice across the Tiber.