On this feast of St. Anthony the Abbot, I am reminded of a peculiar episode in the life of the saint that St. Jerome records. In full, it reads:

But to return to the point at which I digressed. The blessed Paul had already lived on earth the life of heaven for a hundred and thirteen years, and Antony at the age of ninety was dwelling in another place of solitude (as he himself was wont to declare), when the thought occurred to the latter, that no monk more perfect than himself had settled in the desert. However, in the stillness of the night it was revealed to him that there was farther in the desert a much better man than he, and that he ought to go and visit him. So then at break of day the venerable old man, supporting and guiding his weak limbs with a staff, started to go: but what direction to choose he knew not. Scorching noontide came, with a broiling sun overhead, but still he did not allow himself to be turned from the journey he had begun. Said he, I believe in my God: some time or other He will show me the fellow-servant whom He promised me. He said no more. All at once he beholds a creature of mingled shape, half horse half man, called by the poets Hippocentaur. At the sight of this he arms himself by making on his forehead the sign of salvation, and then exclaims, Holloa! Where in these parts is a servant of God living? The monster after gnashing out some kind of outlandish utterance, in words broken rather than spoken through his bristling lips, at length finds a friendly mode of communication, and extending his right hand points out the way desired. Then with swift flight he crosses the spreading plain and vanishes from the sight of his wondering companion. But whether the devil took this shape to terrify him, or whether it be that the desert which is known to abound in monstrous animals engenders that kind of creature also, we cannot decide.

Antony was amazed, and thinking over what he had seen went on his way. Before long in a small rocky valley shut in on all sides he sees a mannikin with hooked snout, horned forehead, and extremities like goats’ feet. When he saw this, Antony like a good soldier seized the shield of faith and the helmet of hope: the creature none the less began to offer to him the fruit of the palm-trees to support him on his journey and as it were pledges of peace. Antony perceiving this stopped and asked who he was. The answer he received from him was this: I am a mortal being and one of those inhabitants of the desert whom the Gentiles deluded by various forms of error worship under the names of Fauns, Satyrs, and Incubi. I am sent to represent my tribe. We pray you in our behalf to entreat the favour of your Lord and ours, who, we have learned, came once to save the world, and ‘whose sound has gone forth into all the earth.’ As he uttered such words as these, the aged traveller’s cheeks streamed with tears, the marks of his deep feeling, which he shed in the fullness of his joy. He rejoiced over the Glory of Christ and the destruction of Satan, and marvelling all the while that he could understand the Satyr’s language, and striking the ground with his staff, he said, Woe to you, Alexandria, who instead of God worships monsters! Woe to you, harlot city, into which have flowed together the demons of the whole world! What will you say now? Beasts speak of Christ, and you instead of God worship monsters. He had not finished speaking when, as if on wings, the wild creature fled away. Let no one scruple to believe this incident; its truth is supported by what took place when Constantine was on the throne, a matter of which the whole world was witness. For a man of that kind was brought alive to Alexandria and shown as a wonderful sight to the people. Afterwards his lifeless body, to prevent its decay through the summer heat, was preserved in salt and brought to Antioch that the Emperor might see it.

Let it never be said that the lives of the saints are boring. Artists, like Demonologists, have throughout the centuries returned to these scenes again and again. The Centaur shows up a lot, probably because it’s a subject that permits the artist to show off his own talents at depicting both human and equine anatomy. Yet we can also detect here a certain visual sensibility that can only be described as picturesque delight and fascination. 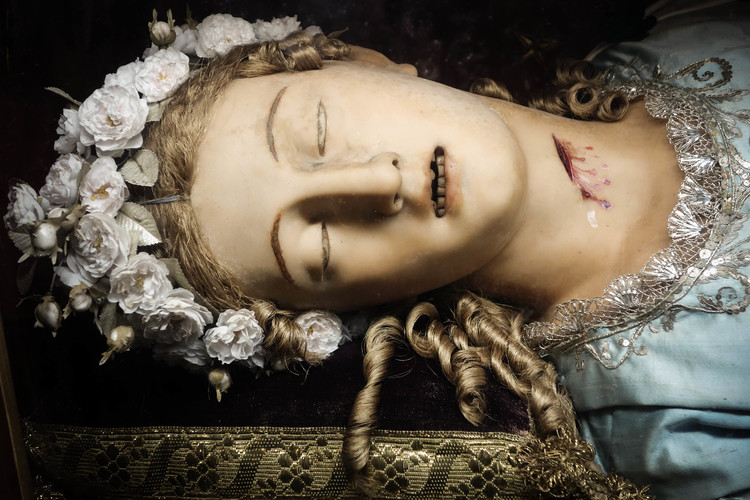 A photograph of Santa Vittoria by Elizabeth Harper. (Source)

A friend has just brought to my attention a blog entitled All the Saints You Should Know. It’s run by someone named Elizabeth Harper, a scholar and photographer based in Los Angeles. Her work is guided by three principles:

These are all sound and salutary beliefs, and the blog is truly beautiful. If you’re like me and find joy in all things morbid (and all things Catholic, while we’re at it), you will no doubt peruse Ms. Harper’s work with as much pleasure as I do. As I’ve said before, the Sacred can be strange. Ms. Harper’s website is a welcome reminder of that fact.

Not a blog to be overlooked!

In Peter Anson’s remarkable volume, Bishops at Large: Some Autocephalous Churches of the Past Hundred Years and their Founders (1964), we learn of many episcopi vagantes and their kindred spirits. It seems that several of these strange fellows dabbled (or more than dabbled) in the occult. Many also coupled that occultism with an interest in ancient heresies, which they sought to resurrect. In a chapter on the succession from René Vilatte, we stumble across a shocking little paragraph:

Mgr. Giraud and most of the priests and layfolk of the Gallican Church, even if not Gnostics themselves, were closely associated with them. Gnosticism was very much in the air fifty or sixty years ago. Even the Benedictine monks of Solesmes felt it worth their while to study what are known as the ‘Magic Vowels’ used in Gnostic rites and ceremonies. In 1901 they published a book entitled Le chant gnostico-magique. (Anson 309)

What an extraordinary claim. The monks of Solesmes, Dom Prosper Gueranger’s own sons, publishing studies of Gnostic chants! Dear readers, do any of you have any information on this bizarre note? I have been able to find evidence, however scanty, that the book Anson mentions was indeed published. But it surely must count as one of the rarest volumes in the assembled miscellanea of liturgical history. I would appreciate any leads whatsoever. Might some of my liturgically minded friends have any clue? Whatever comes of it, there is no doubt a very interesting story lurking behind this utterly unique publication. 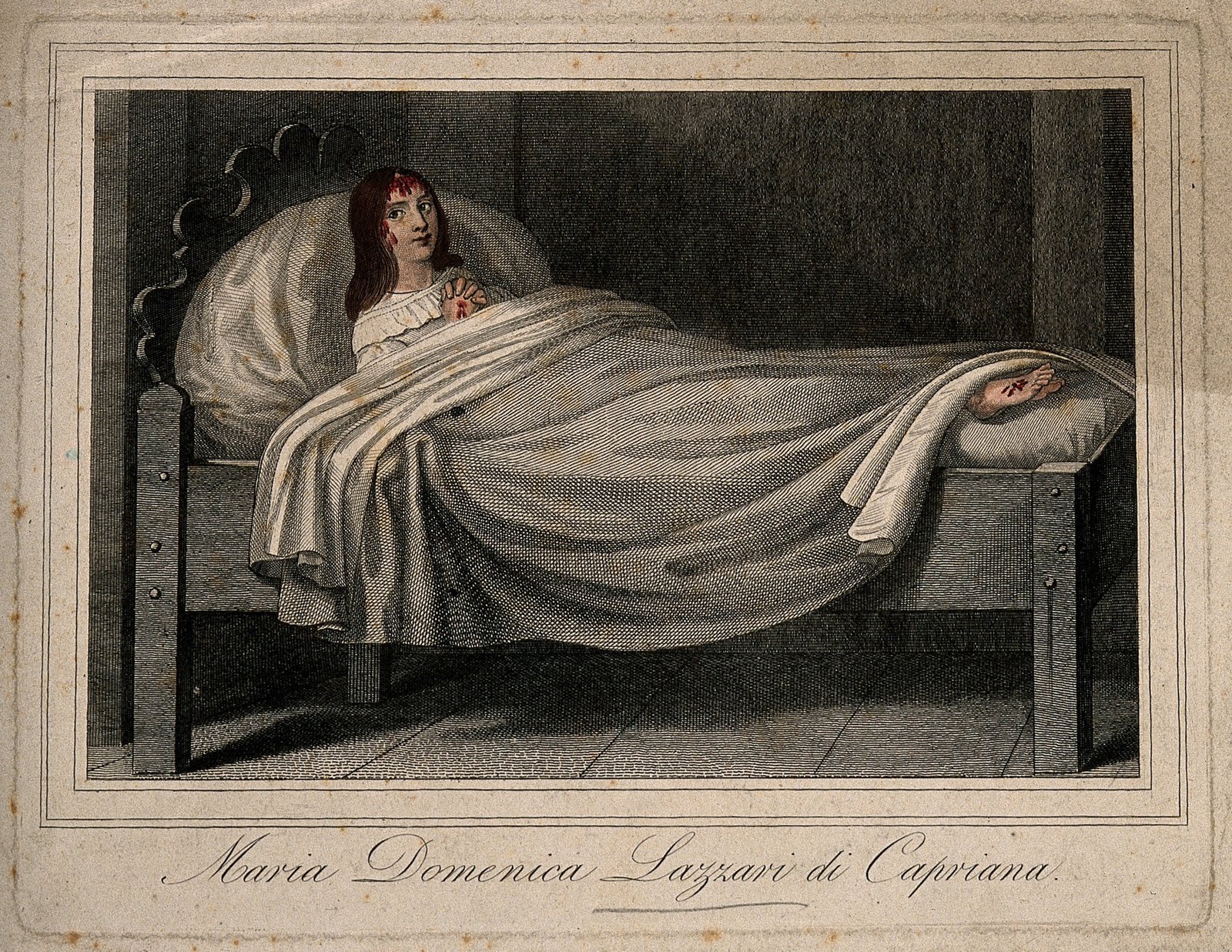 Recently two very worthy endeavors have come to my attention. The first is the blog of the Stigmatics Project at the Ruusbroec Institute, University of Antwerp. The project “studies the promotion and devotion of the hundreds of stigmatics reported in five European countries during the nineteenth and early twentieth century.” It takes a scholarly, non-confessional approach to its subject. No doubt this new venture will yield greater insights into the stigmata as a social phenomenon.

The second is a much more theological blog called Littlest Souls, and it presents a veritable treasure trove of mystic spirituality. The blogger has clearly read widely in the library of the soul passed on to us from age to age by the Church. He seems to place a special emphasis on the 19th and early 20th century mystics, much like the Stigmatics Project. In fact, they probably cover some of the same figures. But unlike the recently-founded work of the Ruusbroec Institute, Littlest Souls has been up and running since May 2012. There is consequently much more material here to review and contemplate. Fans of that other great blog, Mystics of the Church, will find much here to admire.

In my first post on Father Faber, I noted that he represented a kind of lost world of the faith. Today, it is hard to imagine a Catholicism that once supported the kind of imaginatively baroque and overtly sentimental spirituality that oozes from his pages. Father Faber looks odd to our cynical, postmodern eyes. But in exploring his writings now, I find much in them that’s salutary and beautiful. My hope is that I can play some small part in recovering those gems for our times.

Both of these blogs seem to do precisely that; one at the level of scholarship, and one at the level of spirituality. Both set out to investigate and present a spiritual school that often seems morbid, unhealthy, or slightly daft – certainly one that has little place in our age. But there are real values here, real impressions of humanity in communion with the divine. I can only commend their efforts as important contributions to the memory and mystical life of the Church Militant.

I’ve said it before, and I’ll say it again. The Church is weird because she is supernatural, and the supernatural is always strange. We should embrace that fact.