Our Lady of Sorrows, Pray for Us. (Source)

Continuing my Lenten series of Wednesday spiritual masters, here are two meditations from Newman on Our Lady’s dolours. They are taken from his Meditations and Devotions. We should never forget the terrible suffering of Our Lady at the foot of the cross. Her unique woes rendered her the Co-Redemptrix of Mankind.

Mary is the “Regina Martyrum,” the Queen of Martyrs

Why is she so called?—she who never had any blow, or wound, or other injury to her consecrated person. How can she be exalted over those whose bodies suffered the most ruthless violences and the keenest torments for our Lord’s sake? She is, indeed, Queen of all Saints, of those who “walk with Christ in white, for they are worthy;” but how of those “who were slain for the Word of God, and for the testimony which they held?”

To answer this question, it must be recollected that the pains of the soul may be as fierce as those of the body. Bad men who are now in hell, and the elect of God who are in purgatory, are suffering only in their souls, for their bodies are still in the dust; yet how severe is that suffering! And perhaps most people who have lived long can bear witness in their own persons to a sharpness of distress which was like a sword cutting them, to a weight and force of sorrow which seemed to throw them down, though bodily pain there was none.

What an overwhelming horror it must have been for the Blessed Mary to witness the Passion and the Crucifixion of her Son! Her anguish was, as Holy Simeon had announced to her, at the time of that Son’s Presentation in the Temple, a sword piercing her soul. If our Lord Himself could not bear the prospect of what was before Him, and was covered in the thought of it with a bloody sweat, His soul thus acting upon His body, does not this show how great mental pain can be? and would it have been wonderful though Mary’s head and heart had given way as she stood under His Cross?

Thus is she most truly the Queen of Martyrs.

Mary is the “Vas Honorabile,” the Vessel of Honor

St. Paul calls elect souls vessels of honour: of honour, because they are elect or chosen; and vessels, because, through the love of God, they are filled with God’s heavenly and holy grace. How much more then is Mary a vessel of honour by reason of her having within her, not only the grace of God, but the very Son of God, formed as regards His flesh and blood out of her!

But this title “honorabile,” as applied to Mary, admits of a further and special meaning. She was a martyr without the rude dishonour which accompanied the sufferings of martyrs. The martyrs were seized, haled about, thrust into prison with the vilest criminals, and assailed with the most blasphemous words and foulest speeches which Satan could inspire. Nay, such was the unutterable trial also of the holy women, young ladies, the spouses of Christ, whom the heathen seized, tortured, and put to death. Above all, our Lord Himself, whose sanctity was greater than any created excellence or vessel of grace—even He, as we know well, was buffeted, stripped, scourged, mocked, dragged about, and then stretched, nailed, lifted up on a high cross, to the gaze of a brutal multitude.

But He, who bore the sinner’s shame for sinners, spared His Mother, who was sinless, this supreme indignity. Not in the body, but in the soul, she suffered. True, in His Agony she was agonised; in His Passion she suffered a fellow-passion; she was crucified with Him; the spear that pierced His breast pierced through her spirit. Yet there were no visible signs of this intimate martyrdom; she stood up, still, collected, motionless, solitary, under the Cross of her Son, surrounded by Angels, and shrouded in her virginal sanctity from the notice of all who were taking part in His Crucifixion. 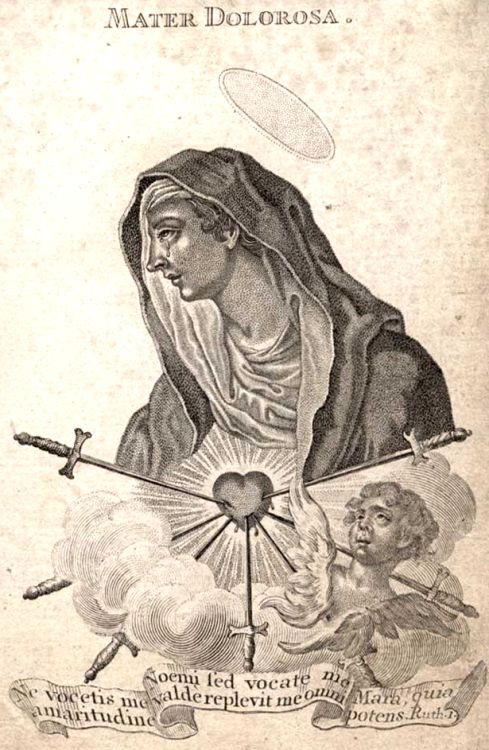