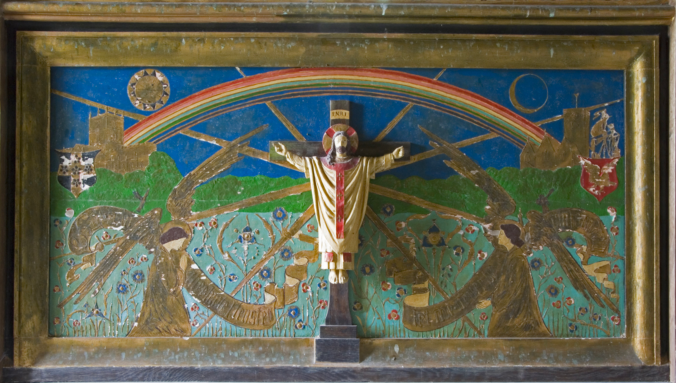 A reredos by John Coates-Carter. (Source)

Over at Liturgical Arts Journal, you will find a very good, brief introduction to an ecclesiastical architect of the Arts and Crafts Movement, John Coates-Carter. He is most famous for his design of the (extraordinary) abbey on Caldey Island. Most of his work can be found in Wales. Perhaps because of his regional interest, I had never heard of him before. Yet his altarpieces are about as Anglo-Catholic as you can get. They have all of the features I noted in my article on AC aesthetics; they’re earthy, colorful, idealized, with a hint of the illustrative verging on the cartoonish. And most importantly, the are deeply human. Anglo-Catholicism restored the human face to British ecclesiastical art. We can see that tendency in the luminous angels and vibrant peasants that appear in Coates-Carter’s sacral art. Do go have a look.