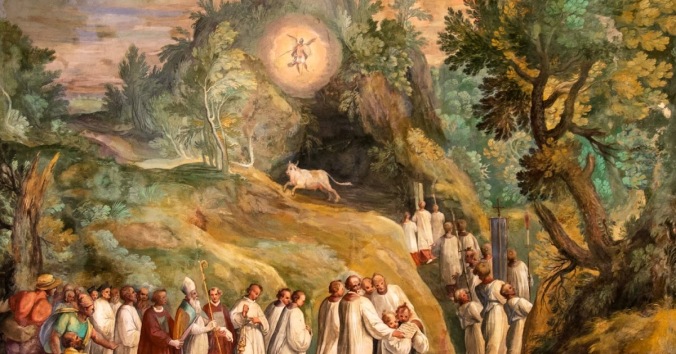 St. Michael, pray for us. (Source)

One of the great victims of the liturgical reform was a whole set of very odd, very particular feasts. The homogenizing, unpleasantly modern mindset of so many reformers back in the 1960’s and 70’s seems to have left no room for anything that could be remotely construed as anachronistic or legendary. Thus vanished the Invention of the Holy Cross, which would have fallen only a few days ago. Another feast lost to us is the one that would, in the old calendar, have come today: the Feast of the Apparition of St. Michael. How wonderful that the Liturgical Providence of God should grant us a feast simply to recall the visible presence of the Angelic Powers in our lives.

Allow me to quote Dom Gueranger at length:

Devotion to St. Michael was sure to spread through the Church, especially after the worship of idols had been banished from the various countries, and men were no longer tempted to give divine honor to creatures. Constantine built a celebrated Church called Michaelion in honor of the great Archangel, and at the time when Constantinople fell under the power of the Turks, there were no fewer than fifteen churches bearing the name of St. Michael, either in the city or the suburbs. In other parts of Christendom the devotion took root only by degrees; and it was through apparitions of the holy Archangel that the faithful were prompted to have recourse to him. These apparitions were local and for reasons which to us might seem of secondary importance; but God, Who from little causes produces great effects, made use of them whereby to excite Christians to have confidence in their heavenly protector. The Greeks celebrate the apparition that took place at Chone, the ancient Colossae in Phrygia. There was in that city a church dedicated to St. Michael and it was frequently visited by a holy man named Archippus, who was violently persecuted by the pagans. One day, when Archippus was at his devotions in his favorite St. Michael’s, his enemies resolved to destroy both him and the church. Hard by ran a brook which flowed into the river Lycus; they turned it aside and flooded the ground on which the church stood. Suddenly there appeared the Archangel St. Michael holding a rod in his hand; the water immediately receded, and flowed into a deep gulf near Colossae where the Lycus empties itself and disappears. The date of this apparition is not certain, but it occurred at the time when pagans were still numerous enough in Colossae to harass the Christians.

Another apparition which encouraged devotion to St. Michael in Italy, took place on Mount Gargano, in Apulia; it is the one honored by today’s Feast. A third happened on Mont Tombe (Mont Saint-Michel; see images at left and at bottom), on the coast of Normandy; it is commemorated on the 16th of October.

The Feast we are keeping today is not so solemn as the one of September 29th; it is, however, more exclusively in honor of St. Michael, inasmuch as the Autumn Feast includes all the choirs of the Angelic hierarchy. The Roman Breviary gives us the following account of the Apparition on Mount Gargano:

That the Blessed Archangel Michael has often appeared to men, is attested both by the authority of Sacred Scripture, and by the ancient tradition of the Saints. Hence, the memory of these apparitions is commemorated in divers places. As heretofore St. Michael was honored by the Synagogue of the Jews as Guardian and Patron, so is he now by the Church of God. A celebrated apparition of the Archangel took place, under the Pontificate of Gelasius I, in Apulia, on the top of Mount Gargano, at whose foot lies the town of Siponto.

A bull belonging to a man who lived on the mountain, having strayed from the herd, was, after much searching, found hemmed fast in the mouth of a cave. One of its pursuers shot an arrow, with a view to rouse the animal by a wound; but the arrow rebounding struck him that sent it. This circumstance excited so much fear in the bystanders and in them who heard of it, that no one dared to go near the cave. The inhabitants of Siponto, therefore, consulted the Bishop; he answered that in order to know God’s will, they must spend three days in fasting and prayer.

At the end of the three days, the Archangel Michael warned the Bishop that the place was under his protection, and that what had occurred was an indication of his will that God should be worshiped there, in honor of himself and the Angels. Whereupon the Bishop repaired to the cave, together with his people. They found it like a church in shape, and began to use it for the celebration of the divine offices (see image below). Many miracles were afterward wrought there. Not long after, Pope Boniface dedicated a church in honor of St. Michael in the great Circus of Rome, on the third of the Kalends of October (September 29), the day on which the Church celebrates the memory of all the Angels. But today’s Feast is kept in commemoration of the Apparition of St. Michael the Archangel. 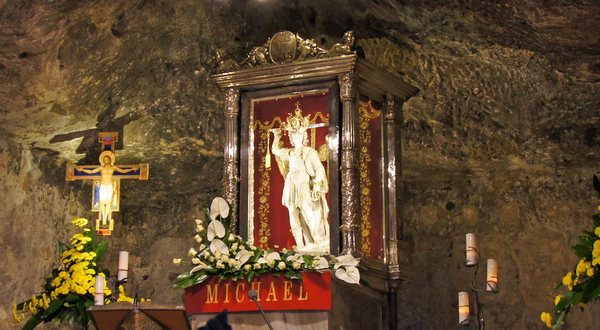 The shrine to St. Michael on Monte Gargano (Source)

Yet these stories, reflecting Medieval devotional practice more than any Biblical story or the life of any particular saint, have no place in the new calendar. It is one thing to accept Our Lady of Guadalupe, beloved by millions. It is quite another to countenance a similar story which might only be of local interest. Yet the liturgy is never purely provincial. While there has always been great variety among local rites and practices, the Mind of the Church synthesizes this diversity into an underlying, supernatural harmony. There is only one High Priest, and the liturgy is His eternal prayer as shared by His bride and body, the Church.

The irony of course, is that the reformers seem to have grasped that principal, but then applied it perversely. They acknowledged the universality of the liturgy, but understood it with prejudice against the forest of particularities that had sprung up over the whole Catholic world over the course of nearly two millennia. They could stand on the precedent of Trent and the suppression of most other rites by Quo Primum (1570). Yet that bull at least allowed those liturgies in existence prior to 1370.

It occurs to me that, in removing feasts like the Apparition of St. Michael, we have allowed ourselves to forget many of those little stories and details that were once part of a common Catholic heritage. That forgetting coincided with a general turn away from the supernatural in Western civilization. The middle of the twentieth century saw a retreat from those doctrines of the invisible world that today’s feast (and others like it) commemorate. The result? A proliferation of “new religious movements” seeking the transcendent in a host of spurious, unsound practices. The mumblings of Victorian cranks were garbled together with bastardized Buddhism and reconstructed paganism, garnished with a generous helping of hallucinogens. And that’s just the New Age.

The task that faces us now is to remember all those things we forgot. May St. Michael pray for us in this critical venture.

2 thoughts on “A Forgotten Feast”