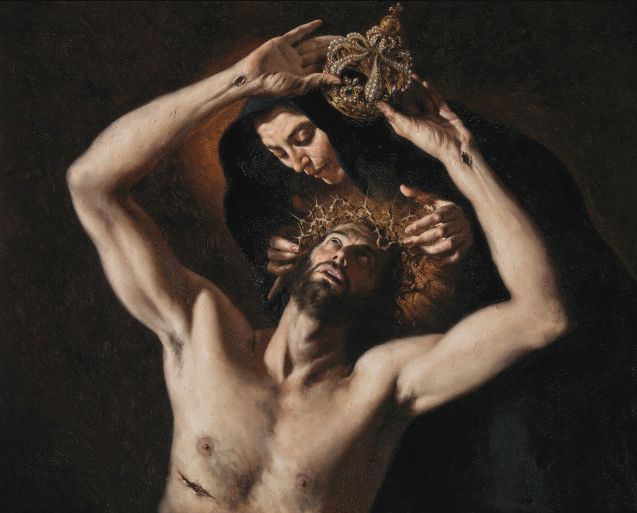 Corredenzione, by Giovanni Gasparro. This painting convinced my heart of the doctrine of the Co-Redemption of Mary. (Source).

It is appropriate on this Feast of Our Lady’s Coronation and Everlasting Queenship that we contemplate the fleeting thrones of this lesser world. Let us commemorate the loss of two great English dynasties, fixed on this day by Providence.

On Aug. 22, 1485, His Majesty King Richard III was defeated on Bosworth Field by a usurper from the House of the Tudors. The Red Dragon of Wales eclipsed the White Rose of York; years later, T.S. Eliot would wear the flower every 22nd of August.

On Aug. 22, 1642, His Majesty King Charles I raised the Royal Standard at Nottingham. This act has widely been considered the formal start of the English Civil War that would end in Puritan dictatorship, the slaughter of the Irish and Scots, and the martyrdom of the King himself for the doctrine of Episcopacy. 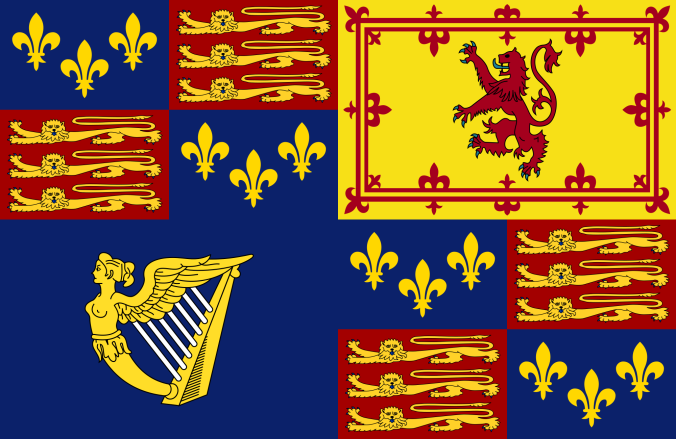 Consider the leaden weight of these crowns. Worn by men alternately noble and feeble, loyal and inconstant, heroic and fearful, they rot away with the passage of time. The gilt of their craft and the earthly acclaim of their subjects have gone the way of all flesh. Those crowns are memories, but even in memory they do not earn the glory and affection they once inspired. Their reputations are occulted with cumbersome connotations. Richard has been much maligned ever since his death, in part by no less a personage than Shakespeare himself. Charles, a more complicated figure, has been swallowed up by his role as the symbolic center of Tory anxieties and Whig acrimony for the better part of four centuries. More bitterly, both kings “Accept the constitution of silence/And are folded in a single party.” They have become an unimportant datum of historical trivia for most people, even in England. 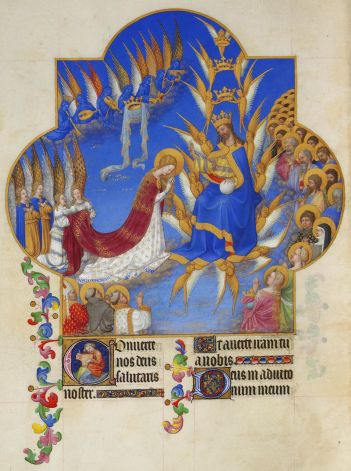 The Coronation of the Virgin, by the Limbourg Brothers. (Source)

How unlike those crowns is that won by Mary! She who was immaculately conceived and preserved from every stain of sin never sullies her crown by any failure of virtue. Having borne the Son of God in her womb, no other glory could ever outstrip what she has already known in her perpetually virginal maternity. Assumed into heaven, she is preserved from the terrible corruption of the grave. And now, as the Church celebrates the Octave Day of the Assumption, we contemplate the eternal joy which her coronation engenders in all the ranks of the blessed. All generations have called her blessed, and all will forevermore. She will never be reduced in the eyes of the world, because no one is more perfect in the eyes of God.

Has there ever been so marvelous a creature as Mary? Can we name, in the orderly chaos of the creation, a being more closely united to the Trinity? Who else among mere mortals has been lauded as “More honorable than the Cherubim, and more glorious beyond compare than the Seraphim?” In her burns the fire of charity; in her grows the ground of humility; in her flows the water of purity; in her soars the mighty wind of patience. She is the New and Sophianic Eve, in which the Wisdom of God is most clearly manifest.

And why? Because she is the threefold Mother of the Redeemer. First, by her Fiat, she assents to a physical maternity of the Word Incarnate. Second, by the sorrows of her Immaculate Heart at the Cross, she wins a sacramental maternity of Christ in the Eucharist. And third, by her prayer in the Cenacle on Pentecost, she gains a mystical maternity of Christ in the whole Church. This threefold motherhood is but one theandric maternity—and thus we see the Trinitarian character of Our Lady’s co-redemption. She and she alone of all mankind is so favored and so bound to the work of Christ. 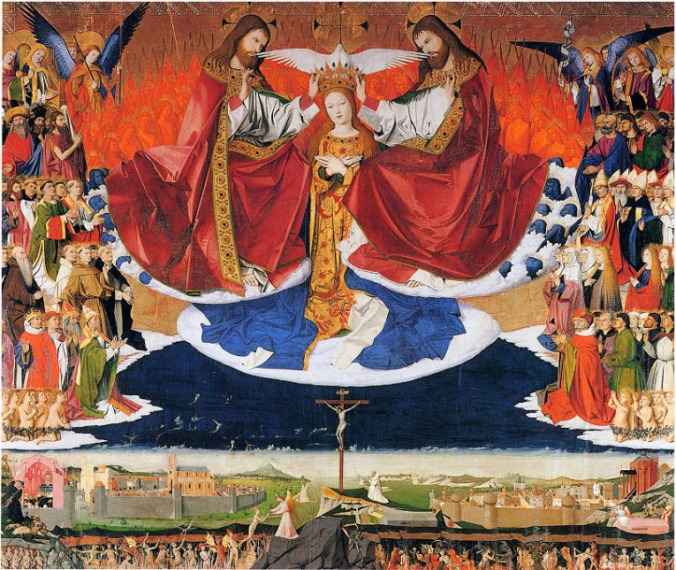 Coronation of the Virgin, Enguerrand Quarton. 1454. (Source). Mary crowned by the Trinity is surely an icon of the Eschaton.

A friend of mine passed on this passage from St. Amadeus of Lausanne, a Cistercian most famous for his eight homilies in praise of the Mother of God. He took it from Universalis, which gives the full liturgy of the hours online. Thus, the Church particularly commends these words to us on this holy day:

Observe how fitting it was that even before her assumption the name of Mary shone forth wondrously throughout the world. Her fame spread everywhere even before she was raised above the heavens in her magnificence. Because of the honour due her Son, it was indeed fitting for the Virgin Mother to have first ruled upon earth and then be raised up to heaven in glory. It was fitting that her fame be spread in this world below, so that she might enter the heights of heaven on overwhelming blessedness. Just as she was borne from virtue to virtue by the Spirit of the Lord, she was transported from earthly renown to heavenly brightness.

So it was that she began to taste the fruits of her future reign while still in the flesh. At one moment she withdrew to God in ecstasy; at the next she would bend down to her neighbours with indescribable love. In heaven angels served her, while here on earth she was venerated by the service of men. Gabriel and the angels waited upon her in heaven. The virgin John, rejoicing that the Virgin Mother was entrusted to him at the cross, cared for her with the other apostles here below. The angels rejoiced to see their queen; the apostles rejoiced to see their lady, and both obeyed her with loving devotion. 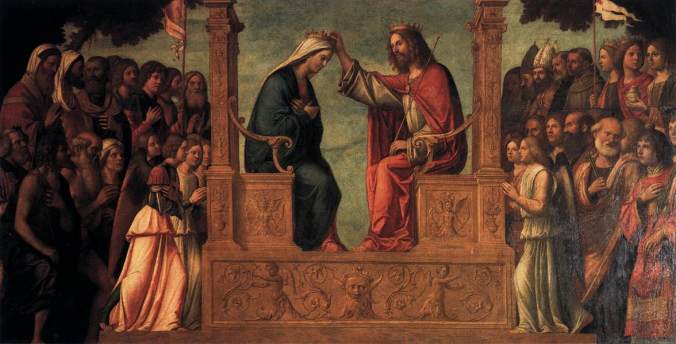 The Coronation of the Virgin, Cima da Conegliano. (Source).

Dwelling in the loftiest citadel of virtue, like a sea of divine grace or an unfathomable source of love that has everywhere overflowed its banks, she poured forth her bountiful waters on trusting and thirsting souls. Able to preserve both flesh and spirit from death she bestowed health-giving salve on bodies and souls. Has anyone ever come away from her troubled or saddened or ignorant of the heavenly mysteries? Who has not returned to everyday life gladdened and joyful because his request had been granted by the Mother of God?

She is a bride, so gentle and affectionate, and the mother of the only true bridegroom. In her abundant goodness she has channelled the spring of reason’s garden, the well of living and life-giving waters that pour forth in a rushing stream from divine Lebanon and flow down from Mount Zion until they surround the shores of every far-flung nation. With divine assistance she has redirected these waters and made them into streams of peace and pools of grace. Therefore, when the Virgin of virgins was led forth by God and her Son, the King of kings, amid the company of exulting angels and rejoicing archangels, with the heavens ringing with praise, the prophecy of the psalmist was fulfilled, in which he said to the Lord: At your right hand stands the queen, clothed in gold of Ophir. 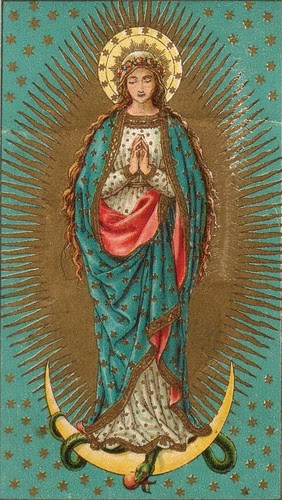 An illustration of “The Woman Clothed With the Sun.” (Source)

St. Amadeus is right; “Has anyone ever come away from her troubled or saddened or ignorant of the heavenly mysteries? Who has not returned to everyday life gladdened and joyful because his request had been granted by the Mother of God?” We who still struggle with sin on the path to beatitude cannot hope to achieve our goal if we will not be with and like Mary. We, too, are promised crowns. The scriptures mention five: the imperishable crown (1 Cor. 5:24-25), the crown of rejoicing (1 Thess. 2:19), the crown of righteousness (2 Tim. 4:8), the crown of glory (1 Pet. 5:4), and the crown of life (Rev. 2:10). Our Lady wears all these and seven more, for she is the “woman clothed with the sun, and the moon under her feet, and upon her head a crown of twelve stars” (Rev. 12:1 KJV). Are these other seven stars the seven gifts of the Holy Spirit, her spouse? Or the seven cardinal virtues? Or the seven sacraments that constitute the Church? Or the seven lesser ranks of the angels in praise of their queen? Impossible to say. Mary is not only the fountain of all holiness, but the mother of the Church’s deepest mysteries.

How might I end this praise of Our Lady that could properly continue ad infinitum? By returning to those lesser crowns with which I began.

Earthly splendor is no great thing. It can only be built on suffering—either our own or that of others. Even when turned to good (as, I would argue, Charles I attempted to use his power), it reflects something of our fallen state. It is slippery, contingent, and as mortal as we are. But the glory of heaven is without end. Incorrupt and incorruptible, it abides in the gaze of the Father. Mary, above all creation, receives this kind of glory. She, the New Eve to the New Adam, mirrors Him in all things. Let us run after the course she trod before us, the course of Her Son’s redemption! Only by pursuing a life like Christ’s can we hope for a reward like Mary’s.

May she pray for us as we celebrate her feast today. 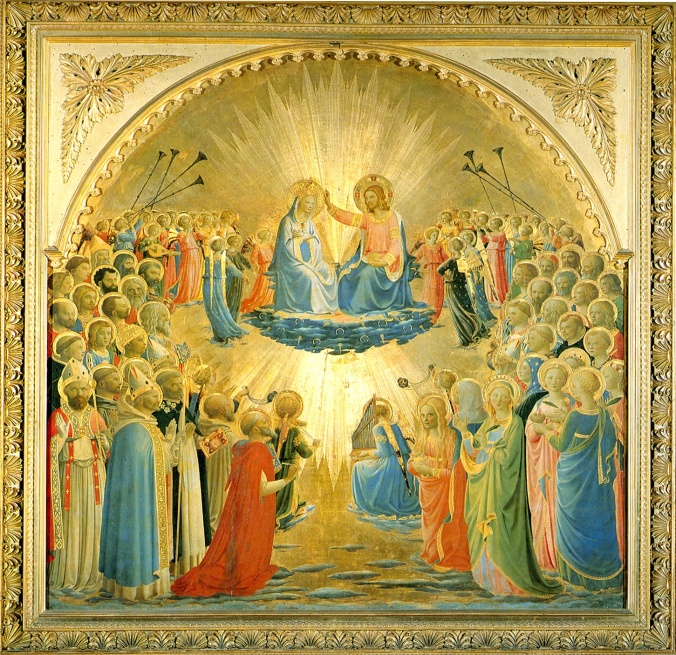 “Coronation of the Virgin,” Fra Angelico. (Source). The Blessed Angelico returned to this subject throughout his career, but this version, hanging in the Uffizi Gallery, is my favorite.

3 thoughts on “On the Coronation of the Coredemptrix”