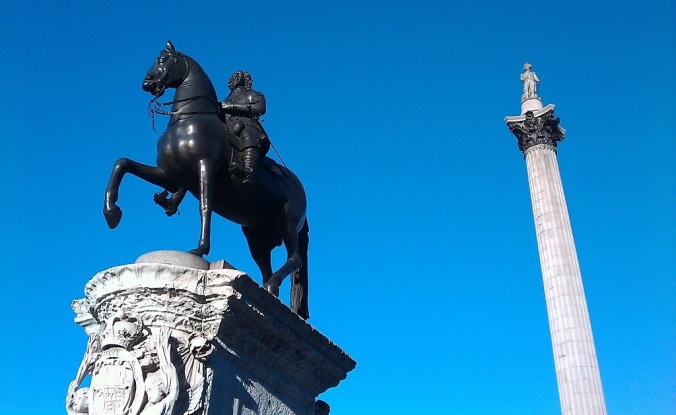 Two heroes, one square: Charles I and Nelson. (Source)

Today may be the anniversary of Louis XVI’s execution, but I just found a wonderful poem about His Majesty Charles I that I wanted to share with my readers. Something to meditate upon before the 30th.

By the Statue of King Charles at Charing Cross

Sombre and rich, the skies,
Great glooms, and starry plains;
Gently the night wind sighs;
Else a vast silence reigns.

The splendid silence clings
Around me: and around
The saddest of all kings,
Crowned, and again discrowned.

Comely and calm, he rides
Hard by his own Whitehall.
Only the night wind glides:
No crowds, nor rebels, brawl.

Gone too, his Court: and yet,
The stars his courtiers are:
Stars in their stations set;
And every wandering star.

Alone he rides, alone,
The fair and fatal King:
Dark night is all his own,
That strange and solemn thing.

Although his whole heart yearn
In passionate tragedy,
Never was face so stern
With sweet austerity.

Vanquished in life, his death
By beauty made amends:
The passing of his breath
Won his defeated ends.

Brief life, and hapless? Nay:
Through death, life grew sublime.
Speak after sentence? Yea:
And to the end of time.

Armoured he rides, his head
Bare to the stars of doom;
He triumphs now, the dead,
Beholding London’s gloom.

Our wearier spirit faints,
Vexed in the world’s employ:
His soul was of the saints;
And art to him was joy.

King, tried in fires of woe!
Men hunger for thy grace:
And through the night I go,
loving thy mournful face.

Yet, when the city sleeps,
When all the cries are still,
The stars and heavenly deeps
Work out a perfect will.

2 thoughts on ““The Fair and Fatal King””